A prototype of Jamendo Radios on the Fonera 2.0

I've spent a few hours yesterday on a prototype of Jamendo application for the upcomping Fonera 2.0

The idea is to allow Foneros to listen to our Creative Commons-licensed radios with an USB sound card plugged in the new USB port of the Fonera. These small sound cards can be found for as little as $1 on eBay, we already ordered a couple of them for the office.

So the application is still in prototyping stage but we're now familiar with the development environment of the Fonera and have a much better idea of how the app can work. 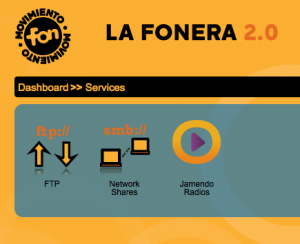 That's it! We still have to figure out how to start the radio automatically when the Fonera starts, add an authentification layer and maybe some sort of volume control.

We have checked in the code on our googlecode repository, feel free to comment!