"Irrational choices" was my favourite session so far. It began with Sheena Iyengar talking about our misconceptions on choice. She demonstrated extremely well that contrary to our assumptions, choice is not always beneficial to our performance or happiness and that sometimes having no choice (example of parents with comatose babies having to choose when to unplug them from life support) is the best way to go. All of it was supported by experiments mostly comparing U.S. test subjects (for who 'choice' is almost sacred) to other people from France, Japan and Russia. Illustrative joke: "Research shows we can't make the difference between Coke and Pepsi. But of course you and I know Coke is the better choice.". It was a well-presented talk and I was stuck by the focus and clarity of her voice even if she was a bit static on stage but some TED speakers are sometimes. But then at the end I realized she was actually blind! (which hadn't been obvious because we were at the upper level of the playhouse and we were so focused on her talk anyway) Impressive talk definitely. 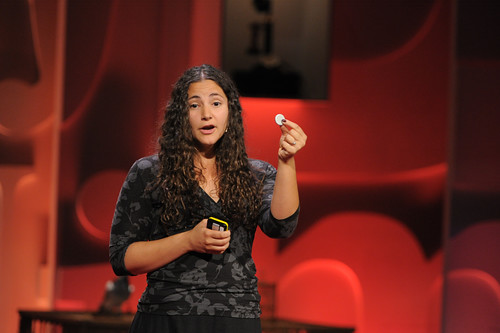 Then Laurie Santos talked about how despite being incredibly smart, the homo sapiens was still capable of huge stupid mistakes. Two theories for explaining that: is it because of the overly-complex environments we created (for instance the financial markets) or because our minds are somehow fundamentally flawed? To find which was right, she started experimenting on monkeys, and training them to use money to see if they reproducted our mistakes! Which is of course at first unbelievable but in true TED spirit she goes on to show the results and develop from there. So here they are: we saw videos of monkeys trading coins for food, understanding notions such as price, stealing coins (!), and most importantly reproducing a classic human incoherence: not taking the same risks when faced with a possible bonus or malus, although they are both equal in absolute value.  Like human, they play safe for bonuses and take risks for maluses. Astonishing! So there's a design flaw in our minds that dates way back... The good news is that being aware of these flaws may help us bypass them. This talk and the previous one had some shared ideas with the book How we decide.

Mark Helliott, a pastor, made a short talk on miracles or more exactly the perception we have of them. 80% of the U.S. believes in miracles. He was also funny: "I'm a pastor, I'm in the miracle-believing business".

Lewis Pugh who talked at TEDGlobal last year went on stage again to talk about his new endeavor at the exact limit between insane and... well, just insane actually :) After swimming for 18 minutes in the North Pole a few years ago, this year he climbed to swim on top of the Everest. He shared his near-death experience with us, what's like to begin drowning in a sub-0°C water at 5300m, because his usual way to prepare for these swims was to be overly energized. Went better when he humbly calmed down in front of the elements and was able to swim calmly. He made a parallel with our own behavior with Global Warming: we need a to take a radical shift and be humble.

Jamil Abu-Wardeh talked about standup comedy in the Middle-East. Axis of Evil comedy tour aims to reverse the urban legend that all muslims are terrorists. "Righting Writing Wrongs". 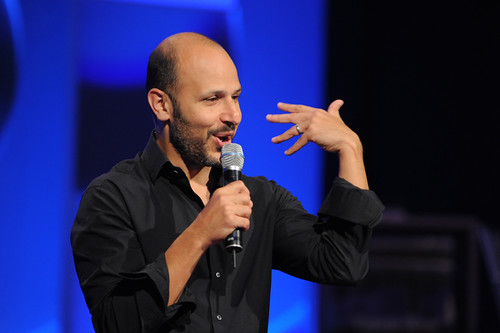 Then came on stage Maz Jobrani, an Iranian-American, for what would turn up to be the funniest moment of the whole day. As one third of the Axis of Evil, he made jokes without taboos on cultures or religions which were incredibly funny because we're not used to jokes on these topics. Huge audience reaction. Congrats to him for such a good moment of (T)E(D)ntertainment.