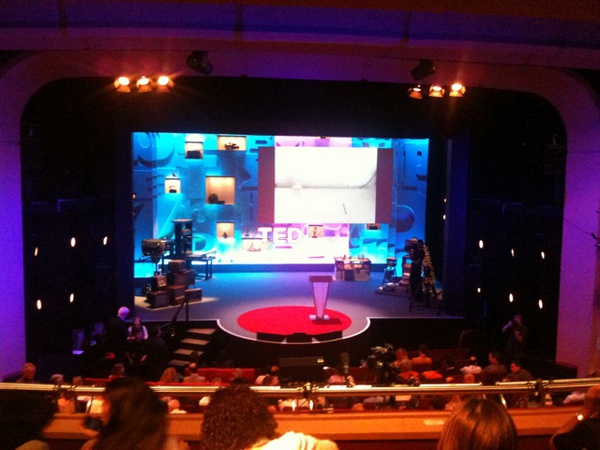 Yesterday the first session "Found In Translation" began with Ethan Zuckerman who talked about the biases of the media and how the web can fix them. We suffer from "imaginary cosmopolitanism". Described a few "xenophiles". His talk was well done and did a good job of introducing the challenges his non-profit Global Voices is trying to tackle.

Then writer Elif Shafak talked about her very international childhood (from France to Turkey to the U.S. from what I remember) and her life as a turkish storyteller who was prosecuted for writing fiction. Not the fiction you'd expect.

Finally Ian Hutchinson showed us how his plastic surgeries helped disfigured patients to have normal lives again. After showing quite graphic images of before/after surgeries, he explained that the future was in tissue engineering. It was interesting for us TEDxers (who also have to coach speakers) to have been at the playhouse earlier during his rehearsals, to see him discuss the graphic content with Bruno and Chris: they didn't censor it but tried to find the best way to use the pictures without shocking people too much, like not keeping them on the giant screen for minutes while he was talking ;-)