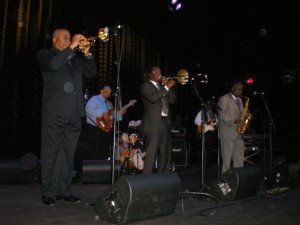 Last March, Elaine and me spent one week travelling in New Zealand, one of the most beautiful roadtrips we've ever made. One surprise I had kept to her was that our stop in Christchurch included a Maceo Parker concert ;-)

Everybody was seated and the seats were numbered, which kind of sucked but we were lucky enough to be on the third row, right in front of the subs... I have been to a lot of Maceo concerts (7 or 8 !!) and this one had one of the best sounds. Each slap of Rodney Skeet Curtis was literally shaking us from head to toe, and by the middle of the concert most of the people were off their seats dancing ;-)

Maceo's son Corey Parker was there and he delivered an excellent solo, maybe more rap than funk but the mix was welcome anyway. Martha High also made her "ladies in the house???" show as always ;-)

All in all, one of the best Maceo gigs I've seen (yet!)