Today was my first "real" TED day, and what a blast! The day begun with a workshop for TEDx organizers where Michel spoke about the lessons we learned from the previous 3 TEDx PARIS editions. We learned a lot more though from the experiences of all the other TEDx organizers, for instance TEDxVolcano which was organized by the TEDxLondon team in just 24 hours while everybody was blocked in London by the April 2010 Volcano eruption. Or TEDxOilSpill which gathered an impressive lineup of experts (and the anonymous man behind the infamous @BPGlobalPR). Or the experience of one guy who picked up one of his speakers at the airport, was while talking with him in his car that he wasn't going to be good on stage, then decided to make him spend 4 hours with a coach right away, and he went on to make the best speech of this TEDx event. Incredible stuff ;-)

Then there was TED University, which is basically a series of short TED Talks made by participants. I took notes for all of them and I might compile them in a later post but the talk that I liked most was from a VP of marketing at Google who talked about what Marketing can learn from Physics, which was his primary education. Both the content and the visuals (the slides were hand-drawn) were simply outstanding.

We went on to the party in the Keble College garden, which was the best time of the day for me, meeting a never-ending stream of great people and beginning to understand what makes the "TED spirit" so famous. It's hard to make a list, but just to give an idea, in a few hours, I spoke with many people from the TED team, countless other TEDx organizers, had a very long chat with David Axmark (cofounder of MySQL) about his experience & open source business models, spoke with one of the board members of Kickstarter about Diaspora, met at least 10 TED Fellows and talked about their inspiring projects, had some good laughs with TED star Rives (including a flash party in a local graveyard...), met Flore Vasseur who did a high-profile documentary about TED for the french network Canal+, and met so many other new inspiring people. 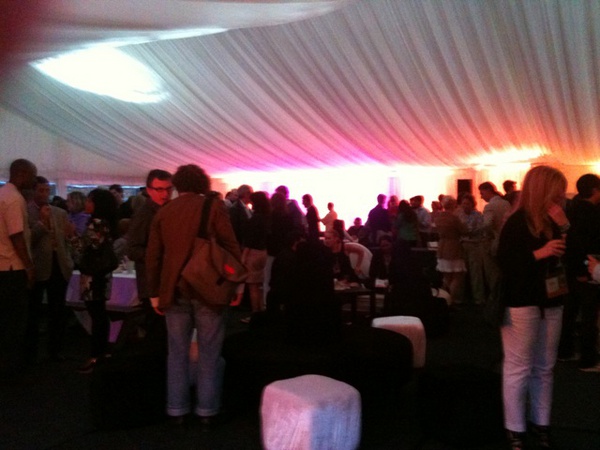 General feedback I had on TEDGlobal, which I can now confirm myself, is that it's quite true to its name : it's a global conference with people coming from all over the world and not just the U.S. (compared to 80% of U.S. participants at TED). I have spoken 3 different languages tonight (well, the 3 I know...) with people from Venezuela, Austria, Poland, Sweden, South Africa, Brazil, India, Australia, ... I think this diversity really contributes to the general atmosphere, it was a bit like iCommons or Wikimania in some ways : a flourishing, truly global community with people contributing locally or globally to a set of goals and values, all for the greater good.

Tomorrow after the second half of TED University we have the first actual TED Talks... Looking forward to it! :)