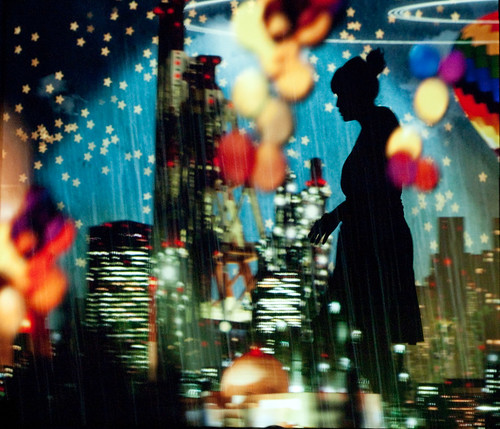 Miwa Matreyek started the session by an unusual visual performance, playing with shades, 2 projectors, and a beautiful soundtrack. She got a standing ovation and quite frankly she deserved every bit of it.

Neil Gershenfeld talked about how computers haven't evolved in their basic design since the 40s. They still have a memory, a processor, inputs, outputs, ... He hopes computing will once again merge with pure physics, that programs will become structures hence objects (like proteines). He also highlighted the trends of fabbers and their possible consequences on the world. A decent talk on a subject I know quite a bit and that should indeed see dramatic shifts in the next few years.

Tan Le demoed Emotiv, her overhead mind-capturing device. Even with everybody's cortex being folded differently like a fingerprint, her headset is capable of training and then recognizing thoughts. I tried it in the demo space and was indeed able to move a cube on the screen left and right just with a thought. The implications of this kind of technology are just too big to list here! But it's the kind of moments you realize we're living in the future...

Anne Quito made a short talk about discoveries in plain sight and how she finally noticed the art gallery that was spread all around her office.

Eben Bayer told us about plastics and their dangers to both nature and us. He's using mushrooms (nature's very own recycling system) to engineer an alternative to the extremely polluting Styrofoam. He's actually growing protection materials for shipped goods, out of mycelium. Impressive!

Derek Sivers showed evidence that telling someone your goals make them less likely to happen, perhaps because then our minds feel they are already done. Quite true! A good reason to keep your future projects secret ;-)

David Bismark explained how we could make voting much more secure and transparent with a smarter voting system based on a paper ballot with some kind of unique hash/2D barcode.

Finally Emily Pilloton talked about Berty Country, where she lives, in North Carolina. It was a "deserted rural ghetto" but now by smarter design, she's able to improve education which in turn benefits the whole community.

After this last talk we went directly to the party at the Ashmolean museum:

Lots of good drinks and again, top class networking. Then we went to eat at the Living room where I ate with a NASA economist and a lovely couple from Baltimore. I was finally able to put my U.S. culture to good use as we talked about Elon Musk, Curb your enthusiasm, Hairspray, ... After the dinner we went back to our house for a french afterparty where even if less people than expected turned up, we had loads of fun recording the video below, a tribute and a mashup of a few sessions of TEDGlobal2010. "When ideas have sex in the new salons, the Hurdy Gurdy makes sweet dreams". Enjoy (and sorry)!