Adrian Dolby talked about organic farming. I have to be honest here and say that I missed this talk because I didn't wake up early enough :-/ Sorry, will try to watch it online! Next, Christien Maindertsma talked about the lifetime of pigs, most particularly after their death, in consumer products. She has a book that lists all the uses of different pig parts: soap, bread, low fat butter, cellular concrete, paint, sandpaper, paint brushes, beer, cigarettes, collagen, bullets, heart valves, ... Scary stuff but quite efficient: 185 different products can be made out of 1 pig.

Thomas Dolby, the music director at TED, crossed the line this year and performed a few country songs with his band. Toni Frohoff showed us just how intelligent whales and dolphins are: "There's more than a drop of humainty in a sea of whales". They are self-aware in front of mirrors. Once, a dolphin stole an underwater camera from one man in his crew, and returned it the next day! Doesn't surprise me that much though because having swum once with two dolphins in Australia I experienced first-hand their playfulness and intelligence ;-) 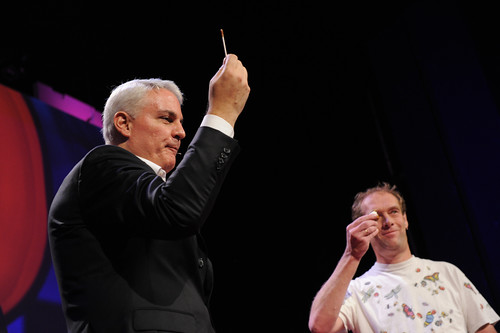 Finally Marcel Dicke talked about insects. 6 million species (80% of total), all have 6 legs, their total biomass is greater than mankind. After bringing us up to speed on that, he explored a more unusual topic: nutrition. Westerners already eat insects, about 500g/year (compared to 80kg/year of meat). However, insect production is much more efficient than livestock, which uses 70% of all agricultural land! He showed that simple mathematics about worldwide growth made it clear that in one form or another, we'll all have to eat insects. It's already taking off in the Netherlands. He went on to bring some products on stage and made Bruno eat one. I don't know if this was rehearsed or not, but Bruno did it ;-) Half the food of the next break was made of insects so that everybody at TEDGlobal could check what their future will taste like ;-)