Session 9 was another big highlight of TEDGlobal for me. Gero Miesenböck tries to break the code of the brain. There are just too many neurons in our brain to understand it directly even if we managed to record all their activity. So his approach is to try controlling a few of them in order to experimentally find what their purpose is. He manages to activate some neurons by using light, I'm not exactly sure how. Anyway, he showed a video of headless flies (yes there was obviously some jokes about that) flying whenever they're stimulated with a specific light. General process is to narrow down these "controlled" neurons to find our which are responsible for actions, critics and decisions. Still a big way to go... 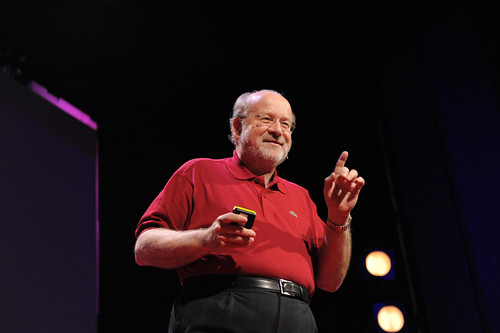 Heribert Watzke explained that our teeth are made for cooked foods (and vice-versa). He calls us "coctivors" (not coined by him). Our brain represents 2% of our body mass but uses 25% of our energy. "A tale of two brains": he explained that in many aspects, our gut could actually be considered as our second brain. It's very closely linked to our "upper brain", digestive comfort playing an important part, like hunger/satiation. "Gut feelings" may actually exist ;-) So our gut is more important than we think, so let's care more about cooking. "Coquo Ergo Sum".

While on the topic of finding second organs, Gina Rudan came to speak about the 2nd G-Spot. She got everybody really excited but the G was actually for "Genius". She talked about how the intersection of passions/value/creativity with skills/strength/expertise created this "genius zone". A bit too "motivational" for me.

Stefano Mancuso argued that we are underestimating the plants. He showed plants eating, moving, sleeping, playing, communicating, and tried to find a brain inside them. Evidences of electrical currents in some roots. Neurons also use electricity... He said that like the Internet, the roots of a plants were designed to withstand aggression (remove 90% of it and it can continue working somehow). "Plantoids" ? 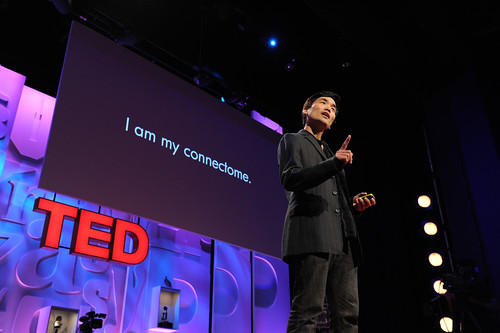 Then Sebastian Seung came on stage for one of the best talks of TEDGlobal on "I am not my genes / I am my connectome". After making everyone repeat that and joking that we didn't even know what a connectome was ;-) He explained that it's the map of the connections between all our neurons. Quite a big graph. They successfully mapped one of a worm a few years ago but ours would be billion times more complicated (but it's the "holy grail"). What is stored in our connectome? Memories? Personality? Sebastian explained a technique for 3D-mapping of neurons, slice by slice on a very small portion of the brain. Partial connectomes could help prove "I am my connectome". Twin brothers have different connectomes because synapses and neuros evolve, mostly because of actual brain activity. He compared our brain to a stream of water: there's always water flowing (mental activity), and as molecules of water flows, the bed of the river slowly evolves: "stream of consciousness"? Could we read memories from connectomes? Total length of wiring in the brain: millions of miles. Search for mental disorders in connectomes. If we are our connectomes, then death would be the destruction of our connectome? To know if people freezing themselves will actually be resuscitated one day, we could inspect the connectome of their brains to see it they are still intact. Amazing stuff.