Today I'm thrilled to announce that Pricing Assistant, the company I co-founded 6 years ago, has been acquired by Contentsquare, the global leader in UX Analytics.

Our stellar team is staying on and will focus on integrating our technology and product into their platform, so this is not the end but merely the start of an exciting new chapter for us.

When we reached break-even last year we considered a few different options to write that next chapter. Our goals were to reach even more e-merchants with our technology and to continue providing a unique and enjoyable work environment for our team.

We were introduced to Contentsquare late last year by Thomas Defaye and we quickly realized that both their product roadmap and their outstanding team were great matches for us. After a few more months spent getting to know them even better, we finally inked a deal yesterday.

Such a milestone wouldn't have been possible without the help of many friends who directly contributed to our first chapter. I want to take some time to thank them properly and recall some stories from the early days of Pricing Assistant.

I must obviously start with my co-founder Martin, going back to the 2011 family trip we took together in Chile where we first discussed building a company together. We had known each other for 6 years at that point and I could sense he would be the perfect co-founder, someone I could trust blindly, someone that could make up for my many flaws, and someone who could shine even when things go wrong. Let's just say that as our CEO Martin proved all of that to be true, and more. I can't wait to see what we build next together at Contentsquare.

By the end of 2012, all we had was a rough idea of an automated pricing service for e-merchants. I was doing a few meetings with old friends to get their feedbacks and went to one lunch that ended up pivotal for our future. I remember entering that restaurant with lots of uncertainty about whether to go all in on this project or a bunch of my other ideas (like building a web browser… thank god). One hour later, I left with clarity and the freshly minted conviction that Pricing Assistant was the way to go. Thank you again Jean de La Rochebrochard, let's have many more lunches like this :-)

I remember a few more early chats that altered our course slightly and ended up having large impacts over time. For those, thanks to Stephan Ramoin, Julien Barbier, Thomas Lang, Olivier Levy and Raphaël Labbé.

Then came the time to enter a startup accelerator. We set our sights on Le Camping, which was the place to be in Paris at the time. Sadly it doesn't exist anymore but it would be an incredible value proposition today with no equity taken, a central spot in the ecosystem and an engaged mentor network. To get in, we rehearsed our pitch intensely (it was Martin's first!) with the help of a few close friends: Alban Denoyel, Cedric Pinson, Cyrille Vincey, Margaux Pelen and Martin Ottenwaelter. Here is the email I sent them announcing that thanks to their feedbacks we had been accepted:

We were in! What followed was a whirlwind of heavy development and company building, closely guided by the Camping family: Elise whom we are forever indebted to, Aviva, Galith, Hugo, Omar and of course Gary whose expert advice and witty punchlines left a permanent mark.

A year later we would also try getting into Y Combinator, but even though we were able to rehearse with Solomon Hykes and Nicolas Dessaigne (thank you both!) we got rejected after our live interview in Mountain View. We still feel lucky to have been able to get direct feedback from Sam Altman and would do it all over again.

Near the end of our season at Le Camping, Martin went to LeWeb in London, which was one of the major industry conferences in 2013, featuring a startup contest. We entered it among 400 other companies and Martin, who had never pitched on stage 6 months before, won first place. It's hard to describe how ecstatic we felt so instead, this is me hugging our first employee Adrien when the result was announced on the livestream: 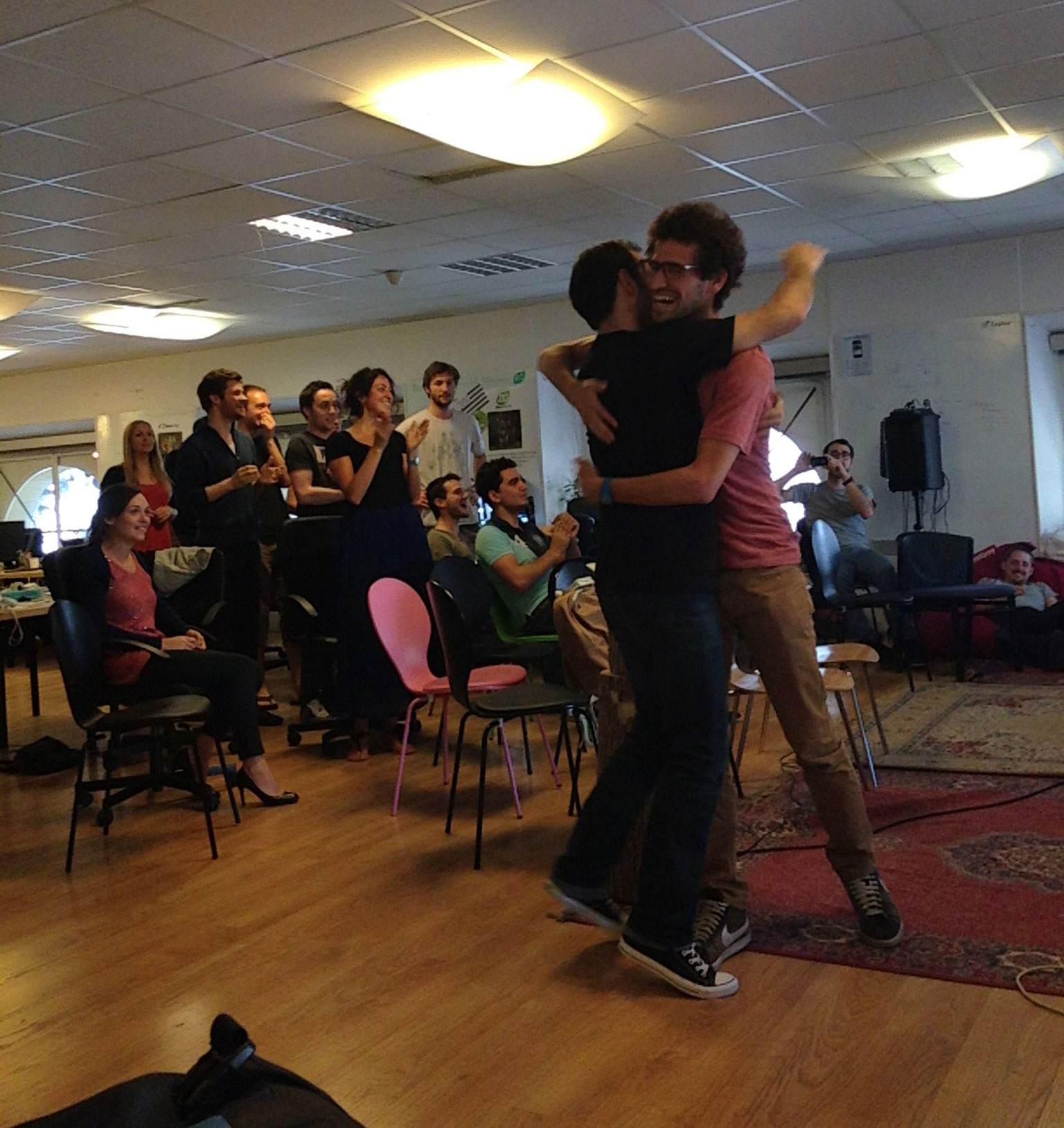 The good news didn't stop here: a few months later, with the invaluable help of Pascal Mercier and Sacha Benichou, we raised 499,999€ from Partech and 5 business angels.

Why 499,999€? Because we were a pricing company after all! And we had good friends like Ori Pekelman who whispered crazy ideas like this one... I also want to thank the one and only Corentin Kerisit who was our internal sponsor at Partech and probably advocated more than I know in our favour.

After that seed round we set up a board with Romain Lavault from Partech and Nicolas Vauvillier. Brainstorming with them every 6 weeks was quite an intense exercise but it made us better every time. VCs sometimes get a bad rap with founders but Romain stands out as the most insightful, fair and committed advisor we've ever had.

I hope I didn't forget anyone from the early days. I'm sure Martin will also have his side of the story with others to thank.

I have many more highlights from the years that followed, including our first shared office with Sketchfab, our team building sessions at Dracy and countless parties that went out of control with questionable music. But that's for another day… as I mentioned, the story is not over yet.

It is also far from over for our customers, who will be progressively upgraded to our upcoming integration with Contentsquare. Watching them use the service we put so much energy into has always been a great source of pride and motivation. We thank them all for their trust and will strive to keep earning it.

That's all folks, let's get started with this new chapter now!