Looking Back on 9 Epic Years of Sketchfab Hacks

This is a very special day for me. Sketchfab was my first significant angel investment back in 2012. I have made a hundred more since then but it is fair to say I would not be the same investor today without such an incredibly lucky first pick.

Sketchfab was always more than an investment, though. I connected very early with Cédric, Alban and Pierre-Antoine because a couple years prior I had considered launching a 3D hosting platform, based on my experience building Jamendo. I am glad I did not go ahead and bet on such a talented team instead! We went on to become close friends and share offices in Paris and NYC.

Sharing some late evenings and good laughs turned out to be a great way to brainstorm some fun ideas. And thus one of my greatest prides over the years became contributing to Sketchfab by hacking on a few of them!

Here are some of the projects that made it to public release:

2013: Adding support for the SpaceNavigator

The SpaceNavigator is a great 3D mouse with 6 degrees of freedom. After spending a few hours with it in Google Earth and Liquid Galaxy, I naturally wanted the same kind of experience in Sketchfab.

So I used the Gamepad API to add support for it in OSG.JS (the underlying 3D framework powering the Sketchfab viewer), thus enabling any visitor on sketchfab.com to just plug one in and explore 3D models like a pro!

More details and a video demo in my previous blog post.

In order to become the leading platform for 3D on the web, Sketchfab needed to build a huge repository of models. Having zero results for common searches would not be a good look. While brainstorming a way to showcase the depth of the archive, we were excited by the idea of integrating Sketchfab in Wikipedia pages.

Short of being able to strike a deal with the Wikimedia Foundation itself, I decided to do a reverse proxy of Wikipedia and swap the images in the infobox with 3D embeds. The result was Volupedia, which is still online today! You can find its code on GitHub.

Instamuseum was by far our biggest hit as it generated hundreds of press and blog articles for Sketchfab.

Our goal was to allow people without 3D modeling skills to upload content to Sketchfab. To do that, I created a tool that scraped Instagram photos and put them in a museum-like 3D scene. Letting users do that with a single click was the killer feature that made it so popular!

It was also a great way to experiment with Blender's Python API and to collaborate with Guillermo from Sketchab, who helped a lot on the design side. Its code, including the Blender scripts, is on GitHub too! 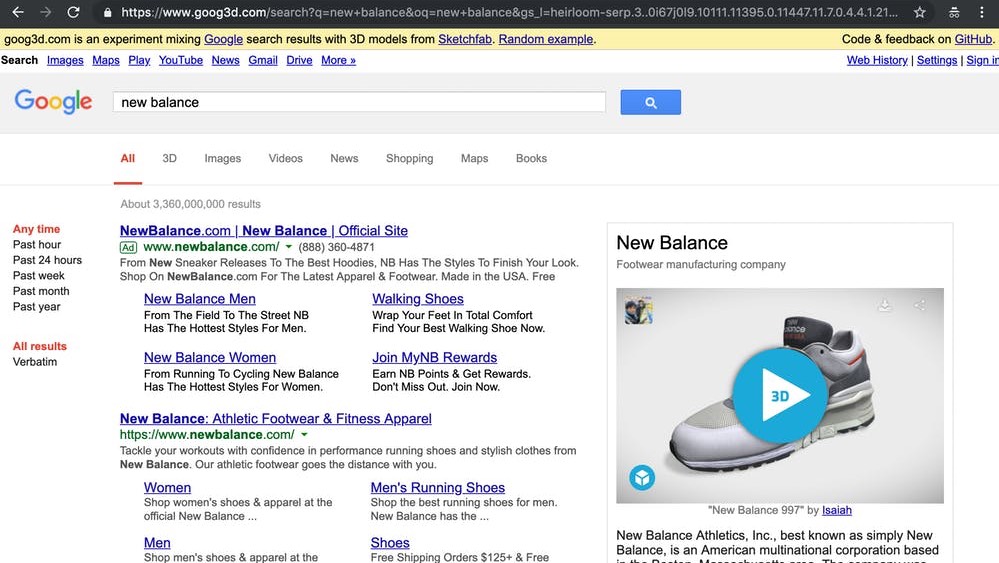 Google launching a competitor to your product is always a strong signal you are doing something right. It happened for Sketchfab in 2017 with the launch of Poly.

We thought it was the beginning of an overall 3D strategy at Google, and we expected 3D models to be integrated in search results any day. However, 2 years later, nothing had happened!

So I decided to step in and do it myself...

I actually re-purposed most of the reverse-proxying code from Volupedia to build Goog3D, a similar service that injected 3D embeds in the sidebar or search results, even going as far a adding a whole new "3D" tab!

When Poly's shutdown was announced in 2020, we wondered if it would be possible to position Sketchfab as the official alternative for Poly users. So I looked at their API and realized I had everything I needed to build a migration tool for 3D models from Poly to Sketchfab!

Google gets a lot of valid criticism for shutting down projects, but to be fair they also have pretty good data takeout policies and early deprecation notices, which allow users to migrate somewhere else. In this case it allowed me to build a one-click migration tool in record time, with Guillermo's help.

On March 30th, it finally happened! Google sent an email to all Poly users, recommending our tool to transfer their models.

That was it. 9 years later, it had become obvious to everyone, including Google, that Sketchfab was the de facto home of 3D on the web. Mission accomplished!

I wish the Sketchfab team an amazing time at Epic Games! Huge congratulations to the founders and all the employees for their hard work.

It was a privilege for me to witness all the stages of this adventure and to be able to contribute with both money and code :-)

See you all in the Fortnite Metaverse!