Johan Rockström, a sustainability expert, talked about how humans overwhelm the planet with their growth and way of life. He was a participant in the BBC program recorded the day before, along with Maz Jobrani and Ethan Zuckerman. 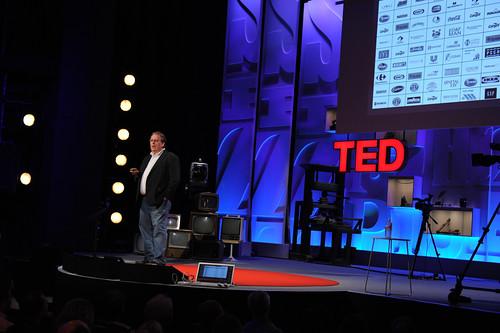 Jason Clay is a VP for WWF. I thought WWF was all about saving pandas but it has actually been renamed World Wide Fund for Nature. So it's not only about Wildlife anymore and it made a talk I had expected to skip intellectually actually one of the best of this last day of TEDGlobal. Jason explained how we can hope to continue living on a finite planet. Example of Ben&Jerry who launched Rainforest Crunch but failed. "You can't wake up a person who's pretending to sleep". We're currently living on the resources of 1.3 planets :-/ The average domestic cat in Europe has a bigger footprint than most africans. We obviously have to use less resources. Can we leave the choice between "regular" and "sustainable" products to the consumer? 1.8 seconds are spent choosing a product in a supermarket shelf on average in the U.S. 3.5s in Europe. The current proportion of sustainable food is incredibly small, we have to accelerate change. This is where Jason makes a difference, much like Auret Van Heerden does in its field: he leverages the biggest companies of the world to make dramatic changes happen quickly. He sampled 15 basic commodities like soja, coffee, cocoa, and realized that only 100 companies deal with 25% of the demand and 40 to 50% of production, worldwide! 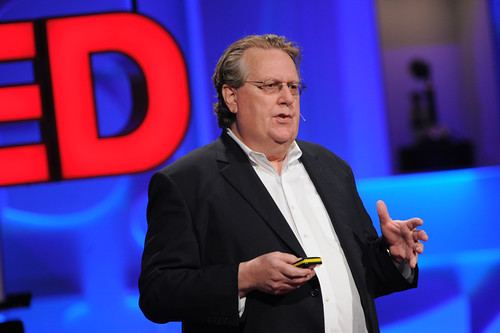 I'm so in love with these moments when you realize that damn, if we do things right we still have a chance to turn things around. Jason seemed very pragmatic. Not the kind of person I would have expected to work at WWF at all, and I'm happy to have been mistaken ;-) His previous achievements include getting 60% of the salmon production to be durable. He's now pressing the 100 companies mentioned earlier to update their policies, and already got 40 of them signed! He explained that Mars (yes the chocolate bars) is sequencing the genome of Cocoa to make production more efficient. He also stressed that consumers should pay the right price of products, adjusted to their total footprint (for instance the cost of water input is often unaccounted for). Adding 3 more billion people and having global resource consumption double in the next 40 years because of developing countries would mean tripling global resource use. Not possible, we have to make a hard turn before hitting the wall and Jason seems to be a leading force on the wheel. Bravo!

Rachel Sussman showed us a few of her photographs about the oldest living things on Earth. Trees, lichens and other unusual organisms, all from 2000 to 600k years old!

Rachel Armstrong talked about programmable chemical complexes, built with carbon which is very abundant and has a cycle of its own. 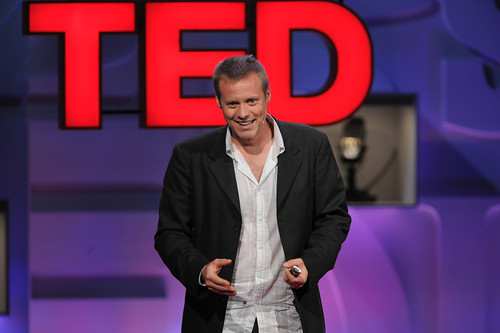 Another highlight: Ze Frank. He's an artist who seems to specialize in what I'd call "crowd-art", making people collaborate around one of his projects. He showed a few of them: Earth Sandwitches, Dressed vaccum cleaners, YoungMeNowMe, Ray's remixes (hilarious!), Childhood walks, 52to48, Angrigami, "Hey you'll be fine" chorus from all around the world (my favourite). Both fun and inspiring. 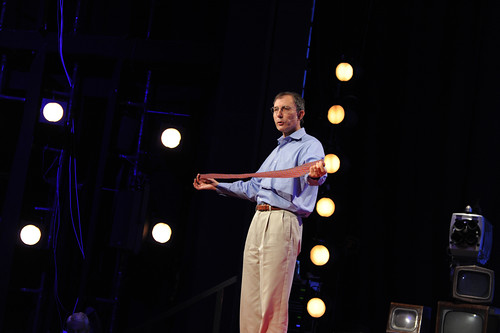 Dimitar Sasselov talked about exoplanets and life in the universe. We may be on the verge of completing the Copernican Revolution. The NASA Kepler telescope give us more precise tools to detect exoplanets, and to prove the assumption that planets of the size of the Earth (hence with a higher probability of hosting life as we know it) are the most common. This wasn't supported by any evidences up until now because of the bias the old detection methods had towards bigger planets. He expects 60 "roughly habitable" planets to be discovered by 2012. Capable of analyzing basic biochemistry remotely. He finished his talk with a very interesting remark, using his tie as a ruler. Life is very small in size in the universe (the tie being the universe, life would be smaller than an atom), but not so small in time (he pointed at the middle of his tie which represented the lifespan of the universe). Well done sir!